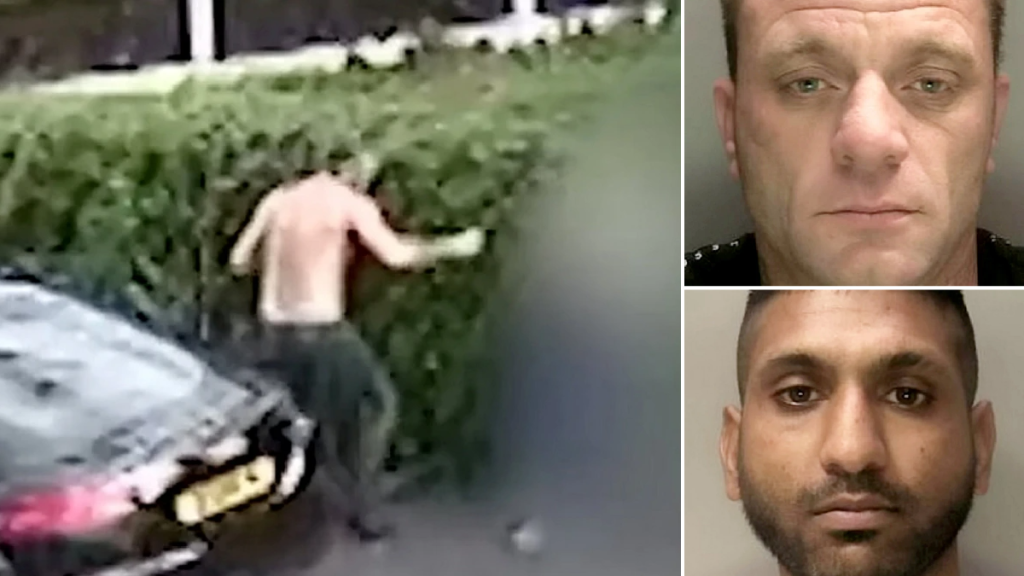 One of the murderers punched the air while the other laughed on (Picture: SWNS; West Midlands Police)

New footage shows a pair of convicted murderers jokingly re-enacting their savage attack on a father-of-five in front of children.

Anthony Bird, 50, was repeatedly kicked and punched by Steven Bennett and Suni Singh Gill in a park popular with families in Tipton, West Midlands in July, suffering injuries which would claim his life two weeks later.

It was described as a ‘senseless’ attack without any apparent motive.

The pair were caught on CCTV celebrating while Anthony staggered to his niece’s house, where she immediately called an ambulance.

Bennett, 39, could be seen punching an imaginary victim in front of a friend while Gill, 34, looked on laughing.

Other footage showed Gill limping away from the scene of the assault with a bottle of vodka, and Bennett checking his right hand as though he’d injured it.

Anthony, also a grandfather-of-two, had been visiting his niece and was walking home through Victoria Park when Bennett and Gill chased him down.

DI Adam Jobson said: ‘There is no motive, we have shown in our investigation that they do not know one another so it just is completely senseless’.

Anthony was remembered as a ‘kind and caring’ grandfather (Picture: SWNS)

The victim, who appeared dazed in footage showing him stopping to rest after the attack, was treated for severe head injuries and fractures to his jaw and cheekbone but his condition deteriorated.

His killers were identified with the help of witnesses and CCTV footage, as well as items seized from their homes linking them to the attack.

They were jailed for a minimum of 18 years each on Wednesday.

Tributes remembered Anthony as a ‘kind and caring’ man who helped his local community.

The murderers carried out their ‘senseless’ attack in front of families (Picture: SWNS)

In a statement, his family said: ‘We have to live with the memory of visiting our dad in hospital following the violent attack on him last summer.

‘It was huge shock to see how badly beaten Dad had been and it is a memory that we are worried will stay with us forever.

‘Our dad was an extremely caring and kind man. He was very proud of his children and was over the moon to be a grandfather.

‘Sadly he never got to meet his second grandson who was born a month after he was killed.

Bennett told detectives he had been falsely identified, police say (Picture: SWNS)
Gill was filmed carrying a bottle of vodka from the scene of the crime (Picture: SWNS)

‘We will never understand why anybody would want to take our dad’s life in such a brutal manner.

‘We can only hope and place our trust in the justice system to punish those responsible accordingly.’

The dark, enthralling power of Succession