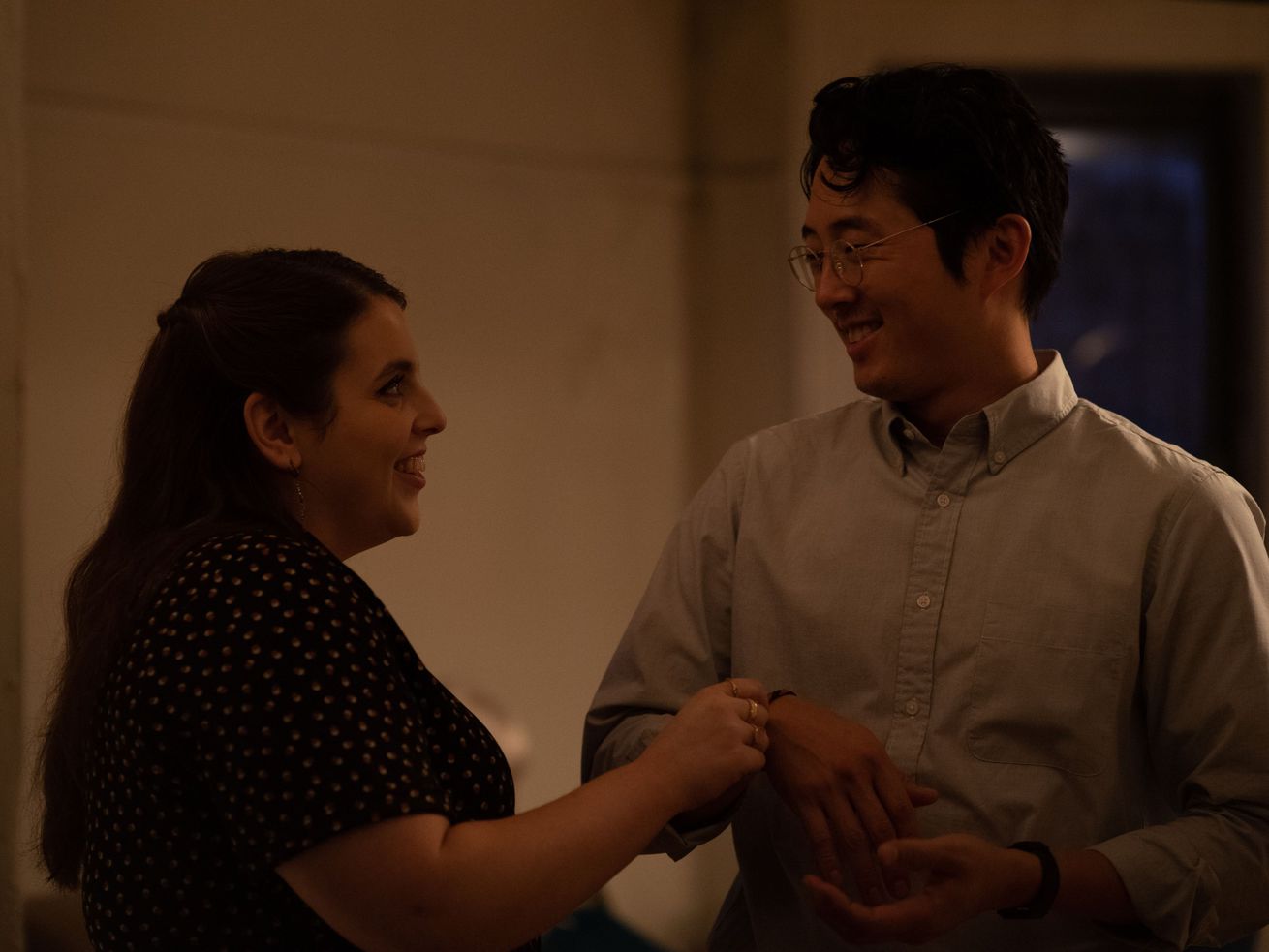 Brigid (Beanie Feldstein, left, with Steven Yeun) invites her family to her New York City apartment for Thanksgiving in “The Humans.” | A24

Jayne Houdyshell, in the role that won her a Tony on Broadway, is the standout in an ensemble that includes Amy Schumer, Richard Jenkins and Beanie Feldstein.

When we talk about the most memorable Thanksgiving movies, the list is paltry compared to the enormous roster of the best Christmas films, but there are some Turkey Day perennials, including Ang Lee’s “The Ice Storm,” John Hughes’ “Planes, Trains and Automobiles,” Jodie Foster’s “Home for the Holidays” and let’s not forget the “You cut the turkey without me!” scene in “Avalon” and the fact Rocky Balboa had his first date with Adrian Pennino on Thanksgiving Day 1975, when Rocky paid a Zamboni driver $10 for 10 minutes of ice time on a closed skating rink.

We can now add to the menu the stark and searing and darkly funny and harrowing family drama “The Humans,” with Stephen Karam adapting his Tony-winning, avant-garde, one-act stage production (which had its premiere at the American Theater Company in Chicago in 2014). Taking place in just one locale, “The Humans” is decidedly stagey and yet still cinematically effective, as we spend an evening with three generations of a close-knit but dysfunctional family who have gathered at the youngest daughter’s just-rented New York City apartment for a combination housewarming/Thanksgiving dinner replete with gossip, revelations, grievances, clashes, hugs, tears, laughs, inside family references, medical updates, strange disturbances and some genuinely terrifying moments.

And that’s without a Bears/Lions game on the TV.

“The Humans” takes place within a spacious but dilapidated pre-war basement duplex apartment in the Chinatown neighborhood where the movers haven’t even arrived yet but aspiring composer/barkeep Brigid (Beanie Feldstein) and her boyfriend Richard (Steven Yeun), a trust fund kid who’s studying to be a social worker, are welcoming Brigid’s family from Scranton, including grandmother Momo (June Squibb), who’s in a wheelchair and suffering from dementia; Brigid’s parents Erik (Richard Jenkins) and Deirdre (Jayne Houdyshell), old-school Irish Catholics, and Brigid’s older sister Aimee (Amy Schumer), a corporate lawyer who still pines for her ex-girlfriend and is battling a serious intestinal disorder. From the moment they’re all together — or splintered off into groups of two or three in the kitchen or a hallway — the family members immediately fall into their familiar rhythms of speech and behavior, for better or worse.

“The Humans” is filled with small touches, as when a drink is spilled or a prayer is said or a confession is given or someone makes a passive-aggressive observation, that will ring true with just about anyone who has ever slogged through a tumultuous Thanksgiving gathering. Not much happens, but so much happens. We know that before the night is over, things will be said and actions will be taken that will forever …read more