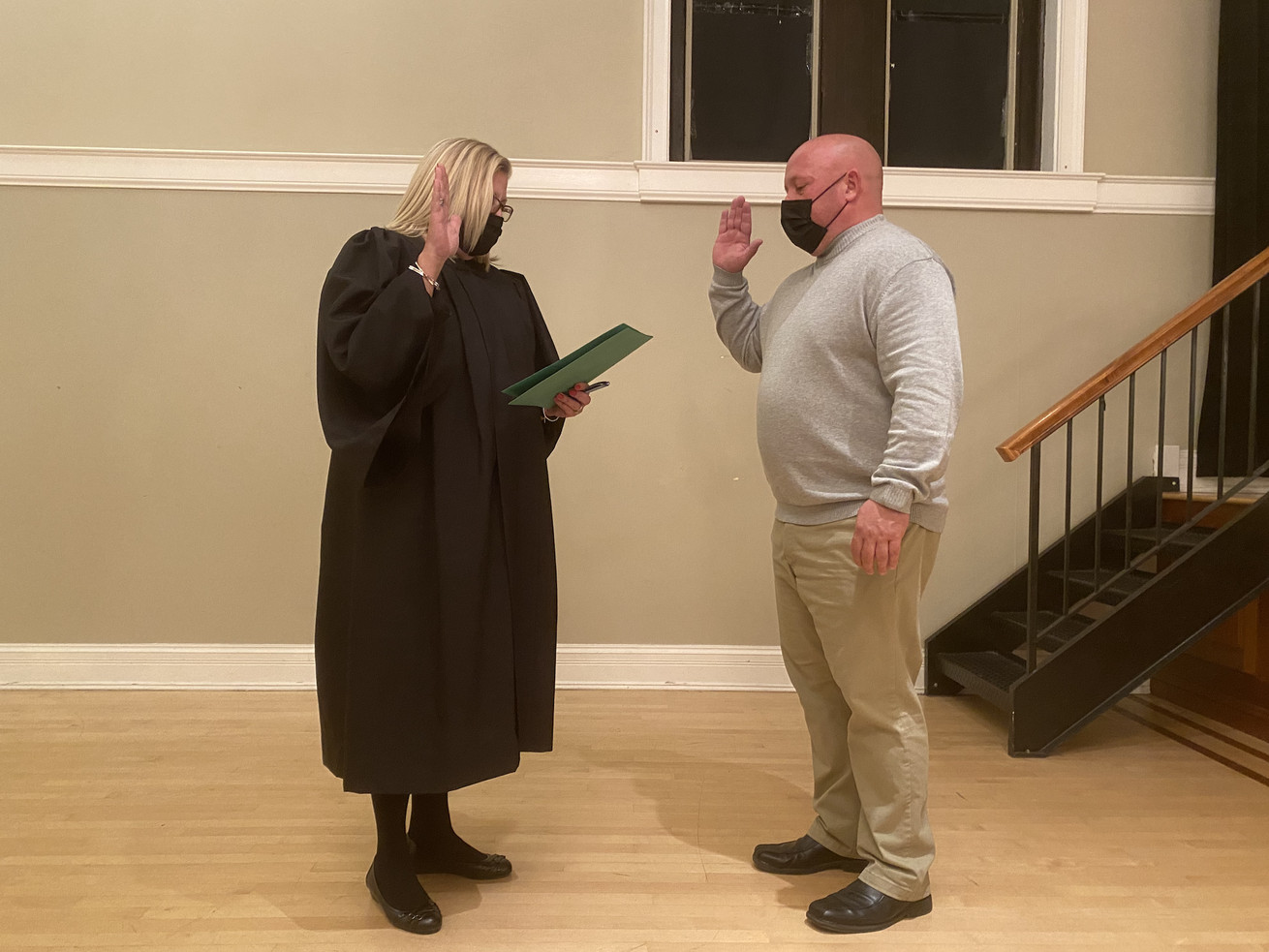 Michael Kelly, left, is sworn in as the new state representative for the 15th District on the Northwest Side and surrounding suburban areas. | Rachel Hinton/Chicago Sun-Times

Seven Democratic committeepersons — and one who voted by proxy — backed Chicago firefighter Michael Kelly to serve the remainder of former state Rep. John D’Amico’s term in the Illinois House.

A group of Democratic Party officials representing the Northwest Side and neighboring suburbs decided Tuesday to fill the seat of a former state representative and member of a Chicago political dynasty with a firefighter who has served as a foot soldier to that political family.

Choosing from a crowded field of candidates, seven Democratic committeepersons — and one who voted by proxy — backed Chicago firefighter Michael Kelly to serve the remainder of former state Rep. John D’Amico’s term in the Illinois House, a position the Democratic lawmaker has held since 2004.

Kelly will represent a district that includes all or parts of the Edgebrook, Sauganash and Forest Glen neighborhoods and Niles and Maine Townships.

Kelly, who has been a firefighter since 2003, said he wants to “work with all sides and try to get things in the state going forward.”

“I’m looking forward to having an open- door policy where I can talk to all the constituents and listen to everybody’s problems and see if we can work things out,” Kelly said.

Kelly has worked on previous campaigns for D’Amico, Ald. Samantha Nugent (39th) and her predecessor, Ald. Margaret Laurino, who is D’Amico’s aunt. D’Amico was not part of the process to pick his replacement.

Anthony Joel Quezada, 35th Ward Democratic committeeperson, initially voted against nominating Kelly for the seat, but later joined with the other committeepersons in a show of unity in the actual vote to appoint Kelly.

Quezada had backed a rival candidate for the appointment and was concerned that Kelly had voted in two Republican primaries.

The firefighter said he voted in the GOP primary in 2010 because his union was backing Judy Baar Topinka for state comptroller and in the 2012 GOP primary as a favor to a friend of a friend, though he couldn’t recall that candidate’s name.

Despite those two instances, Kelly pledged that his voting history was 100% Democratic.

As for Kelly, “he voted in two Republican primaries,” Quezada said. “I just didn’t see a lot of political experience and history, and I didn’t get a lot of calls from community members supporting him. But, again, that does not necessarily speak to the full character of Mr. Kelly. I wish him the best of luck in his next chapter.”

Kelly pledged to work with Quezada and Rabbitt, despite the initial opposition.

Along with Kelly and Rabbitt, others who sought the appointment were lawyer Daniel Cotter; Vince Fattore, the chief information officer of …read more

The War on Thanksgiving Is America at Its Worst

Scientists ‘investigating 75 probable Omicron cases in UK and 150 others’

OMG, I Want to Rent That House: Whistler, Canada