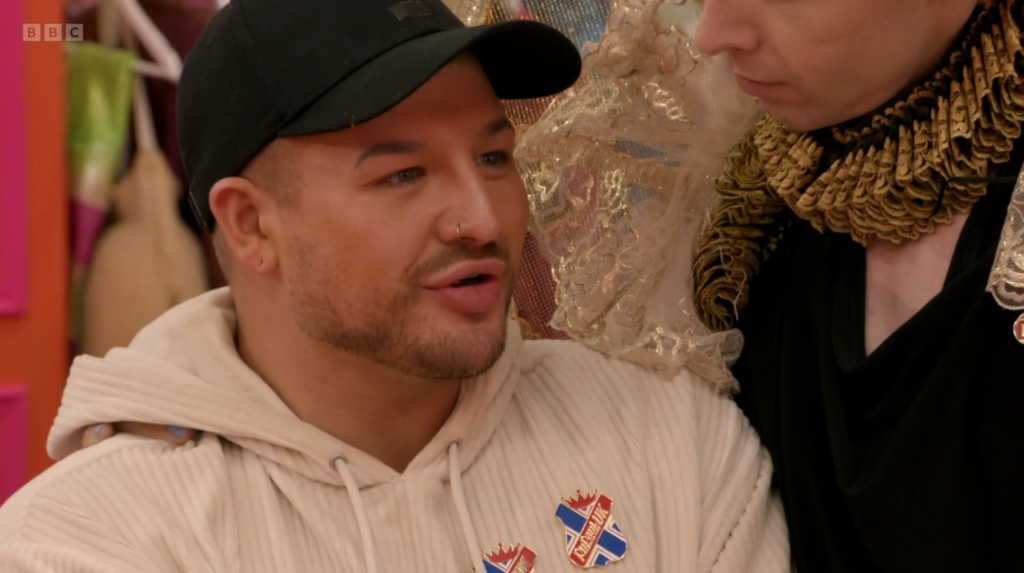 Danny was in tears as they recalled the painful memory (Picture: BBC Three)

RuPaul’s Drag Race UK star Danny Beard has opened up about a horrific experience they had as a child at school when they were targeted in a violent attack involving knuckle dusters with pins attached.

On tonight’s episode of the BBC Three competition, Danny went up against Cheddar Gorgeous, Black Peppa and Jonbers Blonde as they all yearned to be crowned the winner of season 4 and named the UK’s Next Drag Superstar.

Before the final runway of the series, each finalist sat down for an intimate chat with judges RuPaul and Michelle Visage, where they opened up about the moments in their lives that led them to where they are today.

During their conversation with Danny, Michelle pointed out that they have plenty of confidence and a ‘strong self of self’, before asking: ‘Where’d you get that?’

Danny responded: ‘When I was younger, I was really bullied, and I wasn’t me. Like year 8, I don’t know how old you are, this guy made knuckle dusters with pins and cut my face up.’

Michelle’s jaw dropped as she gasped at the drag queen’s horrific assault.

Danny has blown fans away with their talent and heart in the competition (Picture: BBC/World of Wonder/Guy Levy)

The 29-year-old tearfully explained that their parents moved them from Liverpool to the Wirral, which is when their mum sat them down and stressed that this was a ‘fresh start’ for them.

‘“You can be anyone, and anything you want to be now,”’ Danny’s mum told them.

‘And I went into that school in year 9 and the first kid that said to me, “Are you gay?” I went, “Yeah, and what?” And that was it. And that’s when my confidence started growing. Not being afraid to be flamboyant.’

Danny then shared a funnier memory from their teen years, when their dad was left befuddled by their ‘orange’ appearance.

The performer looked back on when their confidence began to grow (Picture: BBC/World of Wonder/Guy Levy)

‘I remember my dad screaming down the stairs, “We’re going to a family barbecue – why are you orange?!” And I was like, “You don’t like me being gay!” And he was like, “No, I don’t like you being orange!”’ he recollected, as RuPaul and Michelle cackled with laughter.

Drag Race UK is available to watch on BBC iPlayer.

‘Her Loss’: Drake and 21 Savage Helped Each Other Write Their Verses