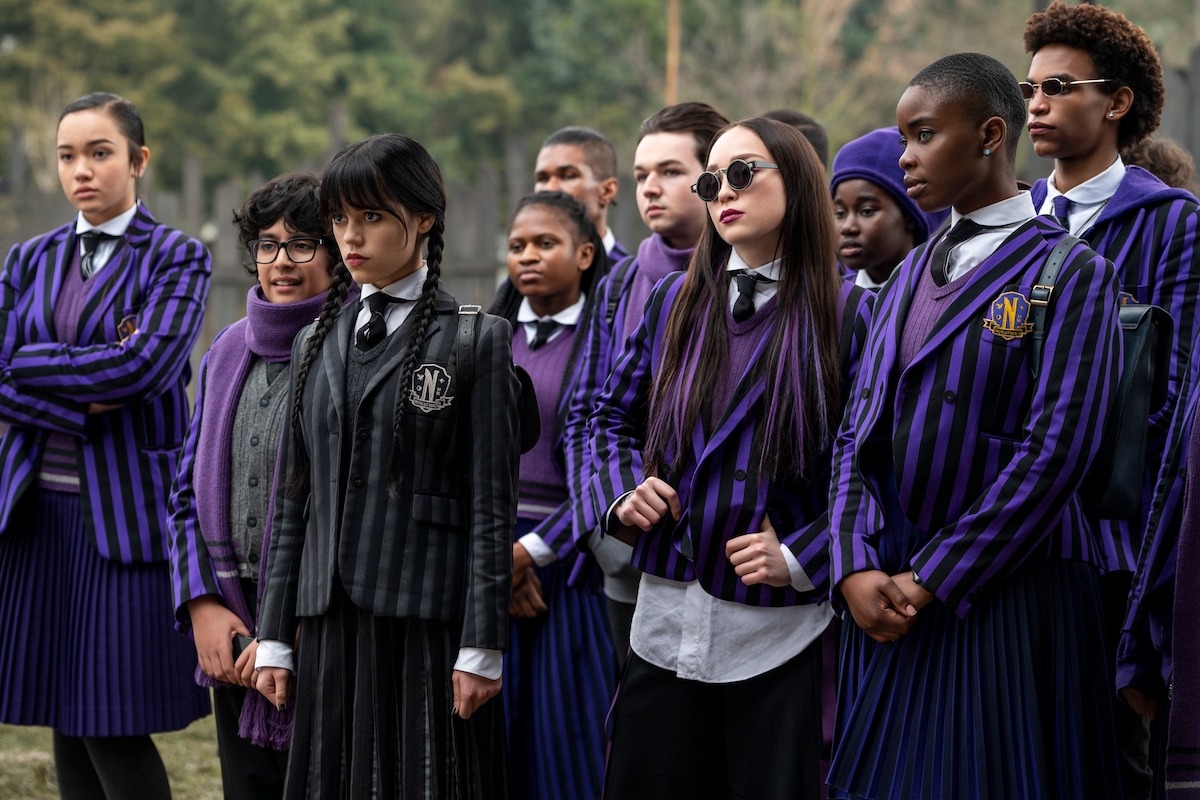 The cast of Netflix‘s Wednesday features some familiar faces. Find out what movies and TV shows you might recognize the Wednesday cast from.

‘Wednesday’ fans might recognize Jenna Ortega from ‘You’ or ‘Scream’

Jenna Ortega plays the titular role in Netflix’s Wednesday. Before that, she played Tara Carpenter in the 2022 release of Scream. Fans might also recognize Ortega from her roles in Jurassic World: Camp Cretaceous, X, The Babysitter: Killer Queen, and You.

Wednesday Addams has two love interests in the Netflix series: Tyler Galpin and Xavier Thorpe. And by love interests, we mean boys her age who find her attractive — Wednesday can’t be bothered with trivial things like relationships when there’s a monster on the loose!

If you recognize Tyler, who Hunter Doohan plays, he previously appeared in Your Honor alongside Bryan Cranston. Doohan also starred in Truth Be Told.

Then there’s Percy Hynes White, who plays Xavier. He previously appeared in The Gifted and Between.

Gwendoline Christie is from ‘Game of Thrones’ and ‘Star Wars’

Gwendoline Christie plays Larissa Weems, the headmaster of Nevermore Academy in Wednesday. Fans may recognize her as Brienne of Tarth from the HBO series Game of Thrones, Captain Phasma from the latest Star Wars trilogy, or Lucifer Morningstar from The Sandman. Christie will also appear in the upcoming season 2 of Severance, which has yet to announce a release date.

Christina Ricci appeared in ‘Yellowjackets’ before being cast in ‘Wednesday’

Fans of The Addams Family will appreciate Christina Ricci’s appearance in Wednesday as Marilyn Thornhill, the botany teacher and house mother of the dorms at Nevermore. Of course, Ricci played the titular character in the 1992 film The Addams Family, but many might recognize her from more recent projects like Showtime’s Yellowjackets. She plays the adult version of Misty in the thriller mystery. Ricci’s vast acting portfolio also boasts credits like Sleepy Hollow, Casper, and the 1993 sequel Addams Family Values.

Much to her disbelief, Wednesday must see a psychiatrist during her schooling at Nevermore. That is Dr. Valerie Kinbott, played by Riki Lindhome.

Before becoming Dr. Kinbott in Wednesday, Lindhome most recently appeared in Duncanville, Grace and Frankie, and Roar. In 2019, Lindhome appeared as Donna Thrombey in Knives Out.

During the eight-episode series, Wednesday encounters several new classmates. If you think the students of Nevermore Academy look familiar, you might have been them in the following projects:

Emma Myers, who plays Enid Sinclair, previously appeared in Girl in the Basement, A Taste of Christmas, and Southern Gospel. Joy Sunday, who plays Bianca Barclay, was in Dog, Dear White People, and Yas Kween. Georgie Farmer, who plays Ajax Petropolus, starred in Treadstone, Mowgli: Legend of the Jungle, Evermoor, and The Ministry of Curious Stuff. Naomi J. Ogawa, who plays Yoko Tanaka, was in Skylines and Assassin previously. Moosa Mostafa, who plays Eugene Otinger, had roles in The Last Bus and Nativity Rocks.

Where you’ve seen the Addams Family actors cast in ‘Wednesday’