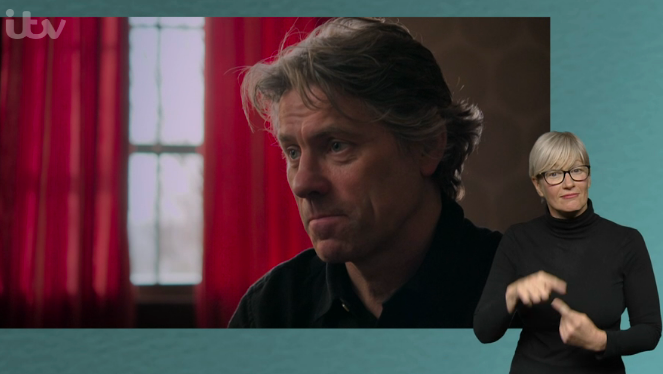 John Bishop has been praised by ITV viewers for a ‘brilliant’ joke told in British Sign Language (BSL).

The comedian is learning BSL to better communicate with his son Joe, 28, who lost most of his hearing as a teenager after contracting a virus.

The 55-year-old’s efforts were documented in powerful and moving ITV documentary John Bishop: Life After Deaf, which aired on Thursday.

In the 50-minute long film, John, as well as his wife Melanie with whom he shares three sons, and Joe embark upon a journey to understand more about the Deaf community and attend BSL classes together.

John said he hoped learning BSL would enable him to relate more to Joe and to reach Deaf audiences who are often excluded from comedy.

The special showed John put his new-found skills to the test and deliver a stand-up routine in BSL, with the audience absolutely cracking up at his joke.

During the gig, John explained that his BSL teacher, Bob, would run through a list of conversation questions to help the Doctor Who star’s fluency.

Hahaha, that was a fantastic joke. ð #LifeAfterDeaf

Brilliant Joke about bsl interpreters and love there’s a bsl stand up show later on..tjay is getting recorded #LifeafterDeaf

#lifeafterdeaf
Brilliant documentary. Joe and John Bishop. Joe is amazing. 60 per cent hearing loss/tinnitus/dizzyness from 16 years old. Good luck to you Joe – youâve been through so much and have so much to look forward to. Inspirational.

Among them was asking John to describe his father, to which he replied he was ‘from Liverpool, loves football and is funny.’

But John said he was perplexed when Bob’s follow-up question was: ‘How tall is he?’

John spoke about why he was learning BSL (Picture: ITV)

After guessing his pop’s height was around 5ft8, Bob asked the same about the Skins actor’s mum, with John giving a similar answer, saying she loved her grandchildren.

Once again, Bob inquired about his mother’s height, with John remarking:’I could not understand why Deaf people are obsessed with how tall you are.’

He quipped: ‘Then I realised it’s to see if you fit in that little box in the corner in the television because that’s the only place you see Deaf people on television.’

Viewers heaped praised on the doc and John’s gag, with one saying: ‘Hahaha, that was a fantastic joke. #LifeAfterDeaf.’