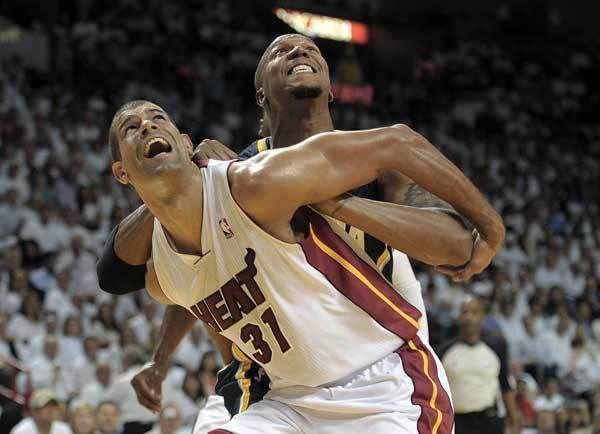 With 2022-23 marking the Miami Heat’s 35th season, the Sun Sentinel is unveiling a series of “5 at 35″ reflections from staff writer Ira Winderman, who has covered the entirety of the franchise’s 3 1/2 decades.

After opening the series with a look at the five greatest games in the team’s history, five franchise-altering moments, the team’s biggest celebrity fans, five of the biggest personalities over the years, five notable Heat Lifers and rivalries that have defined the franchise, we began our position-by-position breakdown with the top five shooting guards and point guards since the franchise’s 1988 inception, moving today to small forward.

1. LeBron James. He arrived on a smoke-filled stage at AmericanAirlines Arena during 2010 free agency, advancing to the NBA Finals in each of his fleeting four seasons with the franchise, with championships in 2012 and ‘13.

An argument could be made – amid Erik Spoelstra’s position-less approach initially crafted for James – that he also stands as the franchise’s best-ever center, power forward, shooting guard and point guard.

At one point, the distance between James and the franchise’s second-best all-time small forward stood as the ultimate chasm – until the arrival of . . .

2. Jimmy Butler. Three years in, Butler already has helped the Heat advance to one NBA Finals (2020) and within one of his own shots to another (2022).

Like James, it is the versatility that has made Butler particularly effective in Spoelstra’s approach. Save perhaps for time at center, like James he has played the other four positions on the court, excelling at each. This season, that role playing could include extensive action at power forward in Spoelstra’s closing lineups.

In yet another James comparison, Butler has found his Heat experience liberating. For James, it meant a pathway to championships. For Butler, the opportunity to move past the controversy of his tenures with the Chicago Bulls, Minnesota Timberwolves and Philadelphia 76ers.

3. Glen Rice. With apologies to Rony Seikaly, Rice arrived as the Heat’s first star, the franchise’s first-ever lottery pick, as the No. 4 selection in the 1989 draft.

Rice’s ability to stretch defenses with his 3-point shooting not only opened the Heat’s eyes to his possibilities, but also the Charlotte Hornets’, utilized as the linchpin to the 1995 franchise-altering trade for Alonzo Mourning.

To this day, the bond between Rice and the Heat remains strong, with Rice serving as Heat scout and team ambassador, as well as a presence at the team’s youth summer camps.

4. Jamal Mashburn. Had there not been the 2010 addition of James, an argument could be made that Mashburn would have gone down as the most versatile small forward in the Heat’s three-plus decades, an adept point forward who was as comfortable attacking the rim as launching feathery jumpers.

Mashburn helped stabilize the Heat during those late-’90s playoff runs to Knicks showdowns, arguably unfairly cast with his 2000 offseason trade to the Hornets as a scapegoat for those losses.