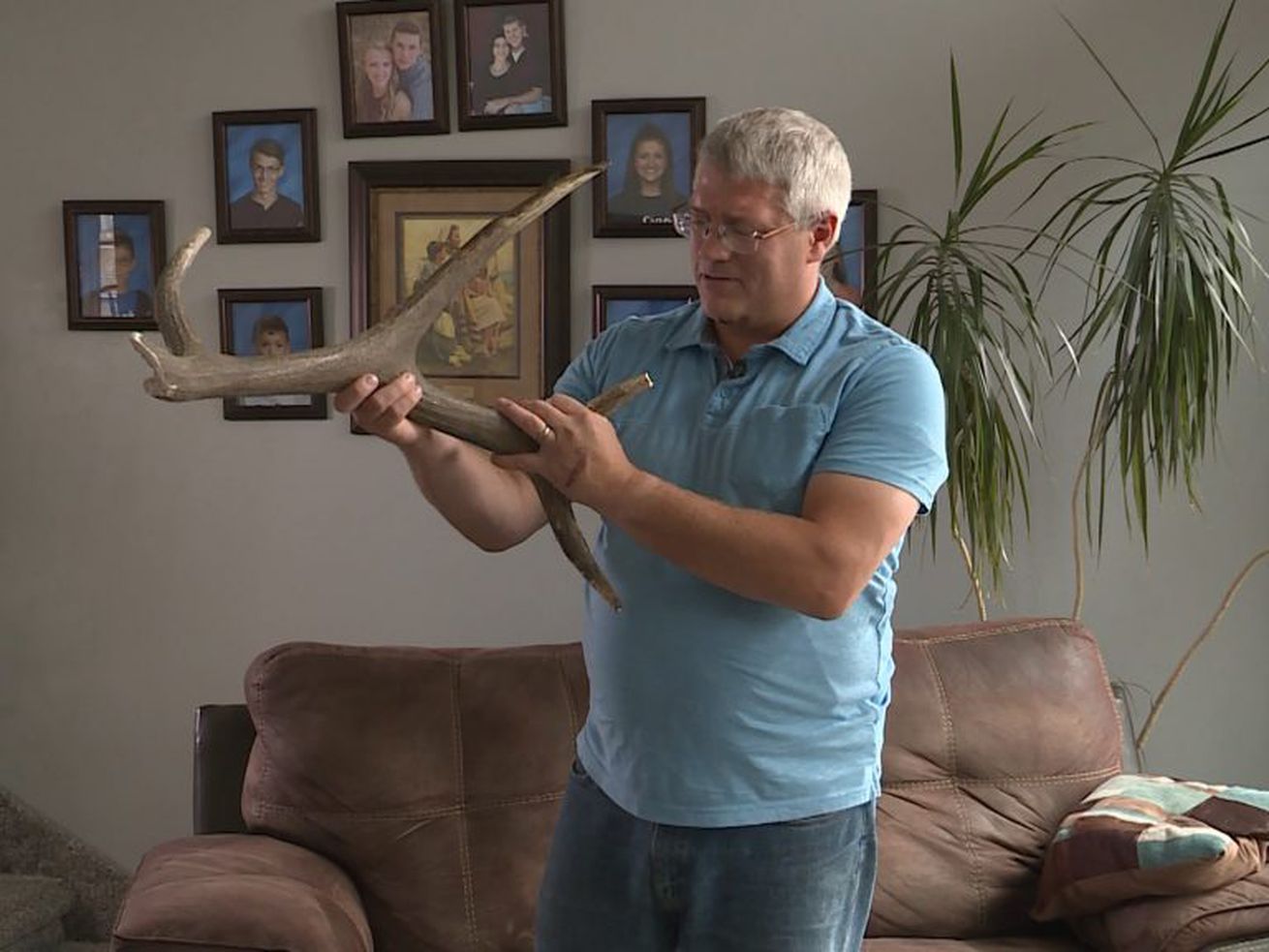 Mike Sepos saved the antler from the elk involved in the crash. | Stuart Johnson, Deseret News

EVANSTON, Wyo. — If he didn’t have the video, Mike Sepos wouldn’t believe what happened.

Sepos and his wife were heading home to Evanston last Saturday when they hit an elk just after the Fawcett exit near mile marker 189 on I-80 in Summit County.

The accident happened so quickly, it’s hard to see what he hit until you play his dashcam video in slow motion — the elk, visible on the side of the interstate just before impact.

“It truly was, it happened so fast,” Sepos said, snapping his finger to illustrate his point.

“The antler came through the windshield and managed to gore me in the chin,” said Sepos. “It was a very close call.”

An inch lower, and the antler would’ve got him in his neck. A little higher, and maybe it would have hit his eye.

“The fact that it hit the hardest bone, it wasn’t disastrous or fatal,” said Sepos.

“We had cruise control on, so it’s 80 mph speed limit there,” he said. “We were just cruising.”

At that speed, you’d almost expect to see more damage to their van.

The windshield was smashed, the front end was damaged and the air bag was activated.

Watch the video of the impact, you see Sepos skid almost completely in a circle. Somehow, the van didn’t tip over.

“I was on the brakes, I think, when I hit it and it just skidded to a stop,” he said.

Other drivers stopped to help while the van automatically called 911.

Walmart said it will eliminate its carbon footprint by 2040 — but not for its supply chain, which makes up the bulk of its emissions

“I couldn’t find my phone and my wife was in a little bit of shock,” said Sepos. “All of a sudden I hear, ‘This is Summit County dispatch, has there been an accident?’”

Sepos and his wife were OK and able to walk out of the van.

“Yeah, I got seven stitches in the chin. They just glued my hand, that was just a little slice there,” he said. “I also had some bruising from the air bag, but we’re OK.”

If that close call with the elk wasn’t enough, just a couple of days later, heavy winds knocked over a tree in his front yard.

But instead of falling into the house, it fell the other way. Two close calls in only two days.

“Yeah, it was kind of scary. We were truly blessed in a lot of ways,” said Sepos.

Sepos saved the piece of antler that came through the windshield and hit his chin.

Along with the video, he has proof of what happened.

Even with the evidence, he still can’t really believe he wasn’t even injured further.

“It was truly a miracle,” said Sepos.

Stuart Johnson, Deseret News
Mike Sepos’ windshield was destroyed when his vehicle hit an elk on I-80 in Summit County.
…read more

If you have to withdraw money from a retirement account, your Roth IRA should be your absolute last resort