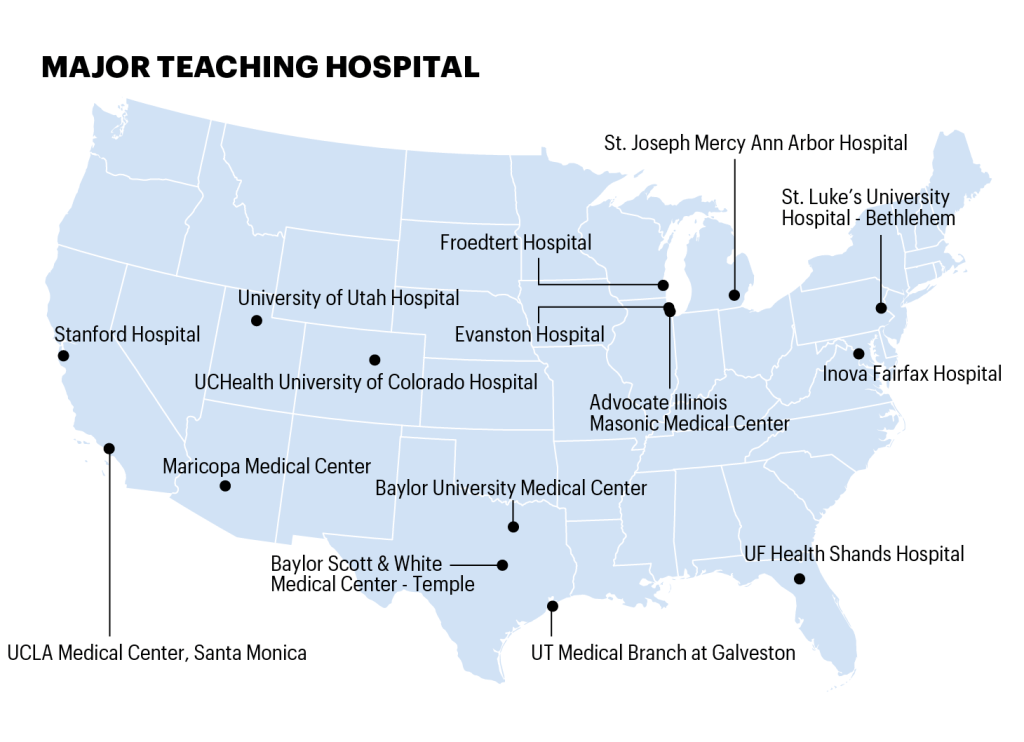 Evanston Hospital, the flagship of the NorthShore University HealthSystem, has long been considered one of Chicagoland’s premier health centers. Founded as a six-bed “Emergency Hospital” in 1891, amid a deadly outbreak of typhoid fever in Chicago and its neighboring towns, the hospital kept going and growing after the emergency ended—adding one of the earliest obstetrical units in the area, then a nursing school, a cancer center, an advanced trauma unit, and a teaching affiliation, at first with Northwestern University and later with the University of Chicago’s Pritzker School of Medicine. In the 1920s and ’30s, an Evanston physician-researcher helped perfect the vaccine for whooping cough; in the ’90s, the hospital opened a center for medical genetics; at the start of the millennium, it was among the first in the nation to adopt a systemwide electronic medical records system.

But what do you discover when you look beyond Evanston’s august history to the hard numbers? How does it stack up today when measured against the competition in unforgiving metrics such as how many of its patients have to be readmitted for complications, or the number who acquire a new predatory infection in the hospital?

The results are incontrovertible: The 109-year-old health center is, well, still a great hospital. In fact, for 21 years, the centerpiece of NorthShore’s five-hospital network has excelled in objective measures that often reveal striking weaknesses in other well-regarded institutions. Evanston isn’t just reputationally good, it’s actually one of the nation’s best-performing hospitals—at least on the basis of 11 criteria that factor in everything from clinical outcomes to patient experience, operational efficiency, and financial health (see our methodology here).

That’s the aim of the Fortune/IBM Watson Health 100 Top Hospitals List: to cut through the perception juggernaut—a “prestige bias,” if you will, that often helps some hospitals with loftier reputations and more ample funding appear better than they truly are, even as it hides the hard-won successes and steady performance of lesser-known systems.

On this year’s list are names you might expect. Two California stalwarts, for instance—Stanford Hospital and UCLA Medical Center—are indeed among the country’s best-performing teaching hospitals when measured on clinical outcomes and other objective criteria. But then, you might be surprised to learn that St. Joseph Mercy Ann Arbor Hospital also has world-class stats where it counts. It boasts a remarkably low rate of risk-adjusted patient mortality, according to government figures. That’s true both while patients are undergoing treatment in the hospital and after they’re sent home. Average lengths of hospital stays, meanwhile—again, adjusted for the severity of the illness—are lower at St. Joe’s, too. So is the average inpatient cost (by a lot). No wonder patients themselves give the Michigan hospital consistently high marks in the long-running HCAHPS (or, familiarly, “H-caps”) survey conducted by the Centers for Medicare & Medicaid Services (CMS).

Japan’s bullet train has a new model that can run even during an earthquake. Here’s the history of the country’s iconic high-speed railway.

LATIN AMERICA FINTECH LANDSCAPE: An inside look at 5 of the most innovative regions propelling the LATAM fintech market to surpass $150 billion