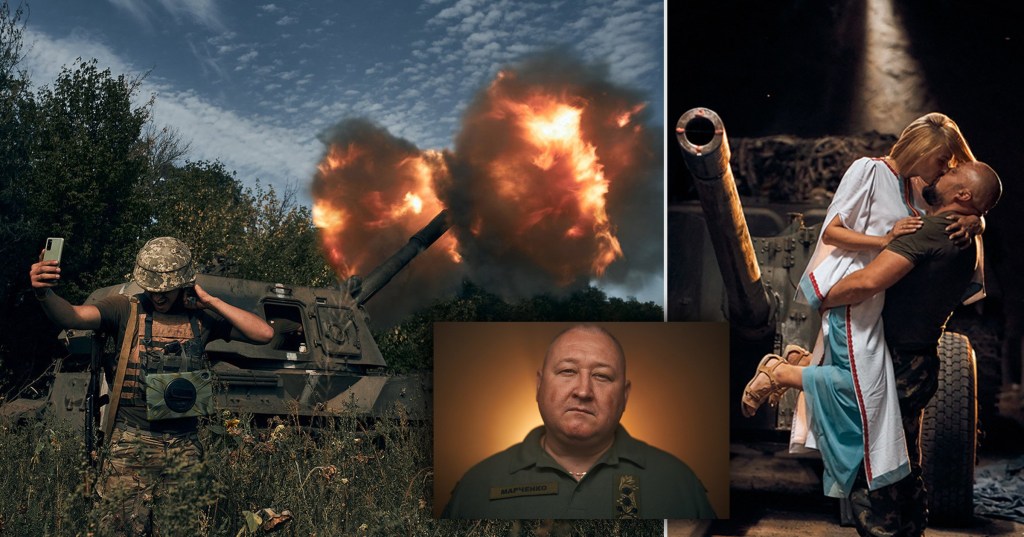 A Ukrainian couple has captured moments of war, life and love in their homeland’s resistance of the Russian invasion (Kostiantyn & Vlada Liberov/libkos.com/#manchesterstandswithukraine)

A collection of powerful images tell some of the personal stories of the Ukraine war and open a window into the lives of those caught up in the conflict.

A frontline wedding between a couple named as Alla and Oleksandr is among the wartime moments captured by Kostiantyn and Vlada Liberov.

The bride surprised her ‘everything’ on his birthday at the military position by waking the soldier up before the ceremony was conducted by a priest at a local church.

His comrades, still in military gear, watched on as the couple took their vows in an ‘incredible’ moment that came amid the unit’s fight against Russian invasion forces.

She later joined her new husband at the unspecified area and wants to enrol in the armed forces of Ukraine to be by his side, the Liberovs say on their website.

The photographers describe the marriage, during which Alla tried out an anti-tank weapon, as ‘another incredible love story born out of this terrible war’.

In a card to her love, Alla wrote: ‘You are my everything, you are my life.’

Alla surprised her partner Oleksandr on the frontline before they were married by a priest at a local church in front of his comrades (Kostiantyn & Vlada Liberov/libkos.com)

Alla tries out one of the pieces of weaponry on hand with the wedding party in the background after the marriage at the frontline area (Kostiantyn & Vlada Liberov/libkos.com)

The newlyweds refused to let the war stand in the way of their vows while the husband was serving on the frontlne (Kostiantyn & Vlada Liberov/libkos.com)

In another impactful image, a soldier takes a selfie while a rocket explodes into the sky behind him.

Showing the now everyday nature of war, a comrade in another picture holds a watermelon and gives a thumbs-up as another missile bursts into the heavens.

The loss, brutality and cruelty of the full-blown invasion is also captured by the couple, who have gained the trust of their military and humanitarian contacts.

In another image that suspends time, two fighter jets carry out a fly-past at a funeral for a military pilot in the central city of Vinnitsya around a month into the war.

In war-ravaged Irpin, the fear, shock and relief on casualties’ faces is captured as they are stretchered out in an evacuation that took place at the start of April.

A Ukrainian soldier takes a selfie on his phone as fire blasts into the sky from an armoured vehicle behind him (Kostiantyn & Vlada Liberov/libkos.com)

The horrific aftermath of Russia’s brutal occupation of population settlements to the north of Kyiv, including Irpin and Bucha, is also documented by the photojournalists.

A body is shown covered with rags in a wood as forensic work takes place by a team wearing bio-hazard suits in one of the hero cities, which are synonymous with Russian war crimes.

Despair at the destruction wrought by …read more