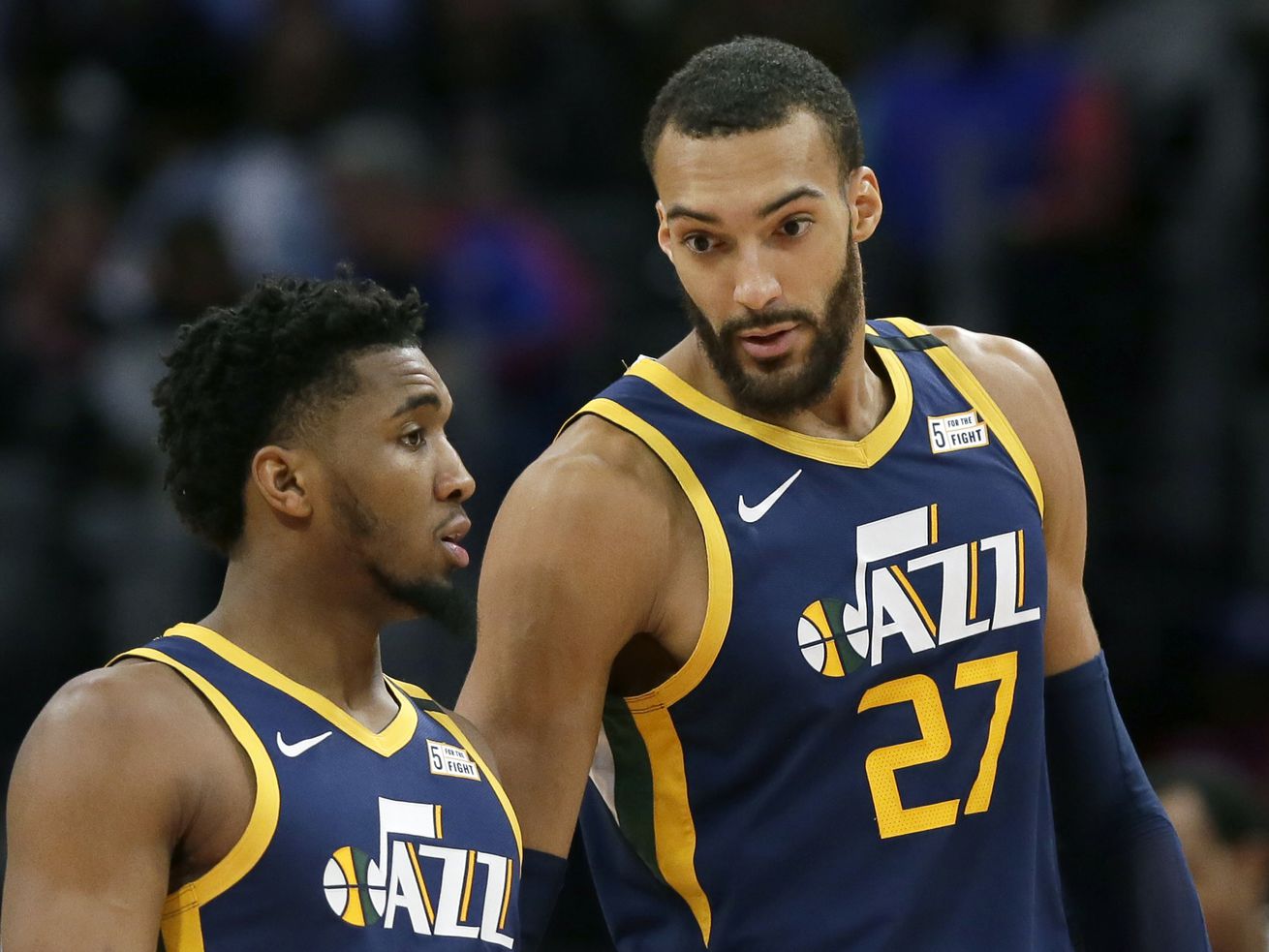 Utah Jazz center Rudy Gobert (27) talks with guard Donovan Mitchell, left, during the second half of an NBA basketball game against the Detroit Pistons Saturday, March 7, 2020, in Detroit. | Associated Press

SALT LAKE CITY — Donovan Mitchell and Rudy Gobert are the cornerstones of the Utah Jazz, and the Jazz would like to keep it that way.

After both players tested positive for the coronavirus in March, existing tension boiled over between them. What happened next would largely be the deciding factor on whether or not Utah would be able to proceed with keeping its star duo in Salt Lake City for the foreseeable future.

Rather than let any sort of misunderstanding, squabble or disagreement fracture their relationship, Mitchell and Gobert drew strength from what would be one of the best learning experiences of their careers and matured in unexpected ways while in the NBA’s bubble in Orlando.

Not only did they make it through being at the center of the COVID-19 chaos, but they brushed off rumors that they wouldn’t be able to repair their working relationship, proved wrong those who doubted they would be able to play together and in some ways became even better players.

“It’s really, really hard to get core franchise-level talent in any market, big or small, but it’s exponentially hard to get that level of talent that has a high level of character and competitiveness,” Jazz executive vice president of basketball operations Dennis Lindsey said earlier this week. “As I’ve mentioned before, we’re working to add players of Rudy and Donovan’s physical talent and competitive makeup and so by definition we’re going to want to keep those type of players moving forward.”

That’s as much an endorsement as a front office executive can give without violating tampering rules before the window opens up so that they can offer very lucrative extensions to both Mitchell and Gobert.

In the meantime, as the NBA works through nailing down the specific dates and deadlines that will allow the Jazz to start inking contracts, the front office is evaluating every piece of the roster and trying to figure out what was learned this season before and during the bubble.

For Mitchell and Gobert, much of the improvement can’t be tracked by numbers or analytics. Sure, Mitchell looked like an offensive dynamo during Utah’s lone playoff series against the Denver Nuggets, but that’s not where the Jazz saw the most growth in the 23-year-old guard.

“When the league shut down, I think he spent a lot of time evaluating where he wanted to go and how he could help this team,” Jazz general manager Justin Zanik said. “I was really impressed with how he handled everything. … Taking the losses for the team hard and wanting to improve as a teammate and a leader, and he made huge strides during the bubble.”