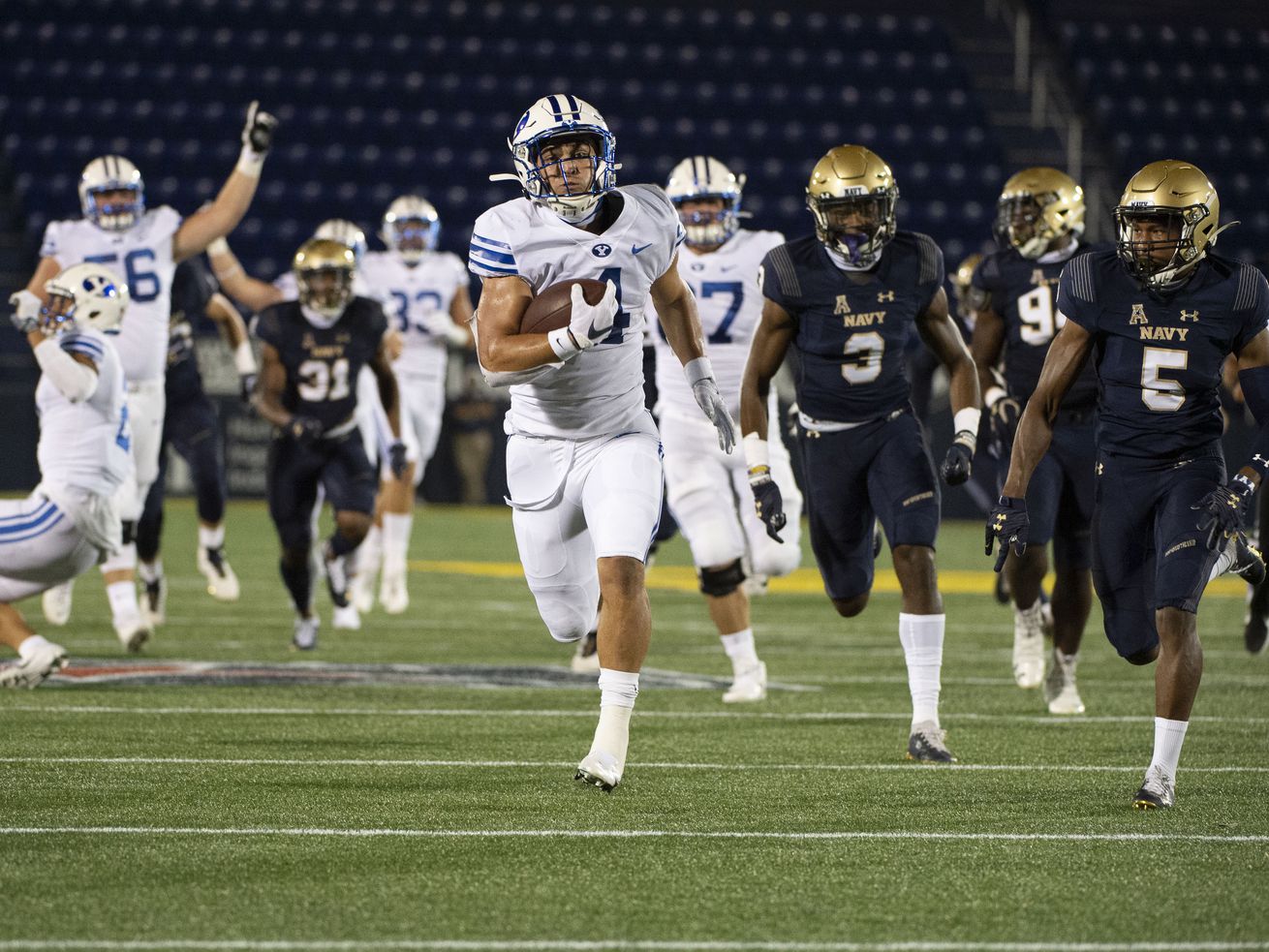 BYU running back Lopini Katoa runs for a touchdown as Navy cornerback Michael McMorris (5) and defensive back Cameron Kinley (3) chases during the first half of an NCAA college football game, Monday, Sept. 7, 2020, in Annapolis, Md. (AP Photo/Tommy Gilligan) | AP

Having dominated the Monday night game on ESPN in all three phases, BYU turns its attention to another service academy — Army West Point — on Sept. 19.

ANNAPOLIS, Md. — BYU football players and coaches showed up at fanless Navy-Marine Corps Memorial Stadium on Monday night wearing T-shirts with messages of hope and love for a national television audience hungry for live sports after a summer of protests over racial inequality and the COVID-19 pandemic.

Then the Cougars sent a different kind of message. They played almost flawlessly in a 55-3 dismantling of a Navy team that, simply put, was not physically prepared for the contact of a live football game.

Coach Ken Niumatalolo admitted as much in his postgame news conference, saying he erred on the side of caution in fall camp due to concern over spreading the novel coronavirus. While BYU was having at least three live, full-contact scrimmages in August, Navy was having zero. No tackling, no blocking.

“This was the worst Navy football game we’ve ever played. … I have been coaching a long time and I’ve never seen a Navy team play like that.” — Navy coach Ken Niumatalolo.

“That game was 1,000 percent my fault,” Niumatalolo said. “Obviously, we weren’t prepared. One team was prepared very well. BYU played great. … One team was playing football. We looked like it was our first live game. There is no one to blame but myself.”

The coach with plenty of ties to BYU — his son, Va’a, played for the Cougars — said he tried to keep his players safe with contract tracing and other precautions and protocols.

“BYU to their credit, mature team, veteran team, man they reminded me of almost an NFL team” – @KirkHerbstreit pic.twitter.com/Zvf6SFUQOl

“This was the worst Navy football game we’ve ever played,” he said. “… I have been coaching a long time and I’ve never seen a Navy team play like that,” Niumatalolo said.

As praise pours in nationally for one of BYU’s most dominant performances in school history, coming as it did against a team that went 11-2 last year, was nationally ranked and beat a Power Five program (Kansas State) in a bowl game, the question now becomes: Is BYU really that good, or was Navy really that bad?

“That’s a hard question to answer, because I know Navy is really good (usually),” said BYU linebacker Pepe Tanuvasa, who played in 13 games for the Midshipmen in 2018 before transferring. “It was a little bit of both.”

Navy’s lack of preparedness was evident from the first series to the last — BYU’s backups even outshined the home team — but the Cougars deserve credit for their readiness level, which was …read more

NBA to play games at home venues with fans in attendance?