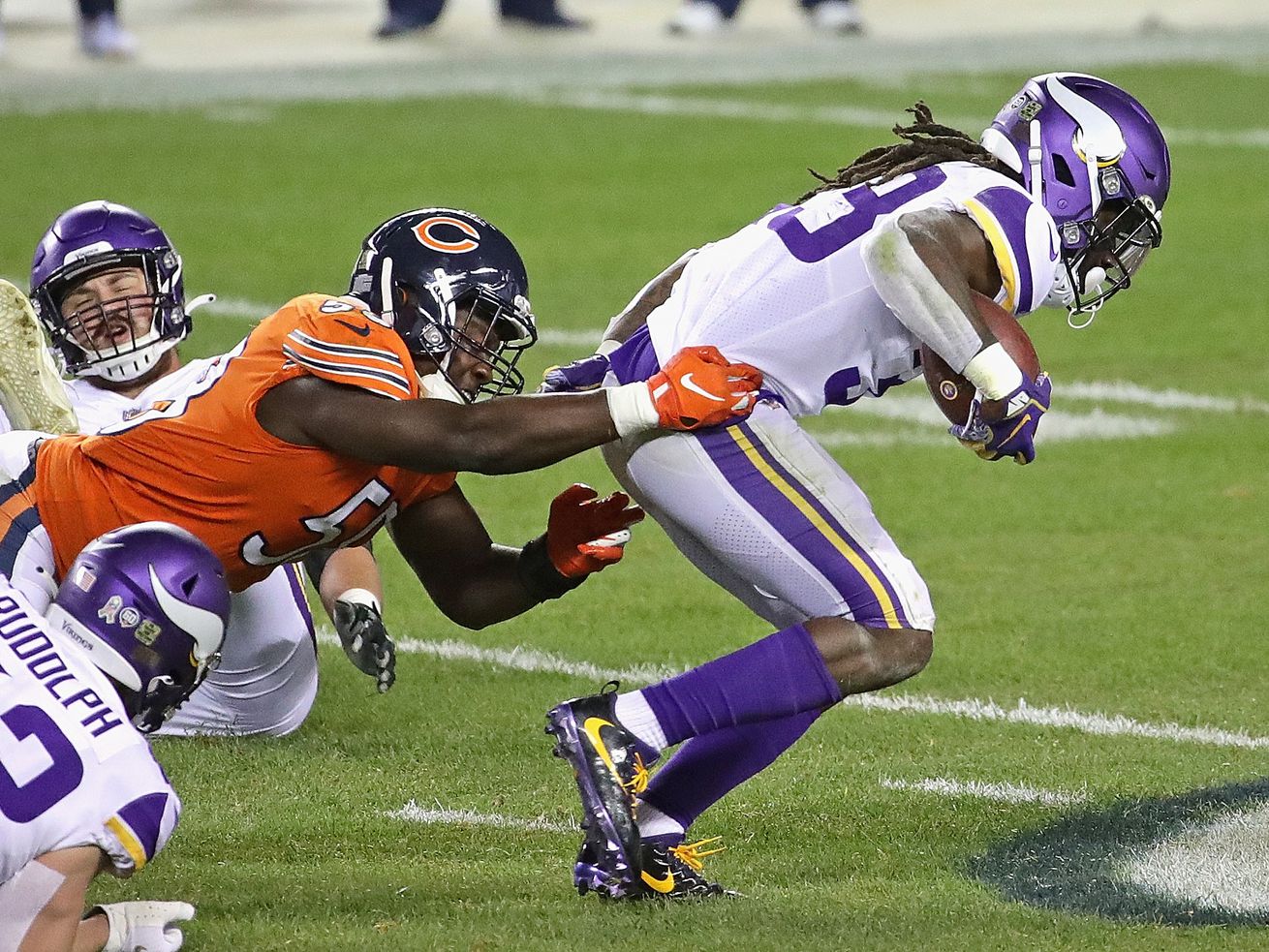 Bears linebacker Roquan Smith (58, tackling Vikings running back Dalvin Cook last week) is tied for the NFL lead in tackles with 96, including a league-best 15 tackles-for-loss. | Photo by Jonathan Daniel/Getty Images

After four consecutive losses, their once-rosy postseason hopes are in jeopardy at 5-5. But a shaky quarterback situation complicates their hope for a rejuvenation.

The bye week gives the Bears their last chance to reset and gear up for one last charge at the playoffs. Plenty of people throughout the organization, including general manager Ryan Pace, coach Matt Nagy and several players, have a lot riding on how the Bears finish their season.

Here’s a look at six key questions facing them:

Should the Bears start Nick Foles or Mitch Trubisky against the Packers?

Trubisky, if he’s healthy. The Foles experiment has run its course. Though he faced tougher defenses early after becoming the starter, he was worse than ever against a 29th-ranked Vikings defense (30th in passing). Trubisky won’t be a savior, but his mobility increases in value with protection breaking down.

Will offensive coordinator Bill Lazor call plays for the rest of the season?

Does it matter? Maybe Lazor needs time to get into a groove, but he’s still calling plays that have yet to work consistently this season. Assuming there’s gradual improvement as the Bears’ schedule eases after their game against the Packers, Lazor figures to keep the job through the end of the season.

When will the Bears’ losing streak end?

The Bears already have burned through one firewall by losing to the Vikings at home, but the Lions at Soldier Field is even more asbestos-reinforced, especially if Trubisky is at quarterback and Lions coach Matt Patricia continues playing to Trubisky’s strength with man-to-man defense. The Bears are 5-0 against the Lions under Nagy, averaging 25.6 points. If they lose that game, the season could go wildly off the rails.

Samsung's flagship QLED 4K TV is one of the best displays you can buy in the $2,000 price range that isn't an OLED

Besides the quarterback, the Bears’ biggest problem is:

The offensive line, which has regressed since being deceptively passable in the 2018 playoff season and must be rebuilt in 2021. That will be a difficult trick, with multiple first-round-caliber upgrades needed in the same year you’re looking for a quarterback. Cody Whitehair and James Daniels are foundation pieces, and Alex Bars shows promise at guard. But every tackle spot — left, right and swing — is open for upgrade.

Under what circumstance would general manager Ryan Pace and Nagy keep their jobs in 2021?

With the relatively quick or unexpected trigger at Halas Hall in the last 10 years — the firings of Jerry Angelo, Phil Emery and Marc Trestman, in particular — change can happen with anything less than a playoff berth. There are still six games to go, but a second consecutive season of regression on offense tilts the ledger against Pace and Nagy.

Smith is picking up steam in the second half (coinciding with fellow inside linebacker Danny Trevathan’s resurgence from an early-season slump) and realizing the high expectations of a breakout season. He is almost …read more

Doctors and health officials in US coronavirus hotspots tell the same story: We’re being villainized and ignored while trying to save lives

What is common stock? The most typical way to invest in a company and profit from its growth