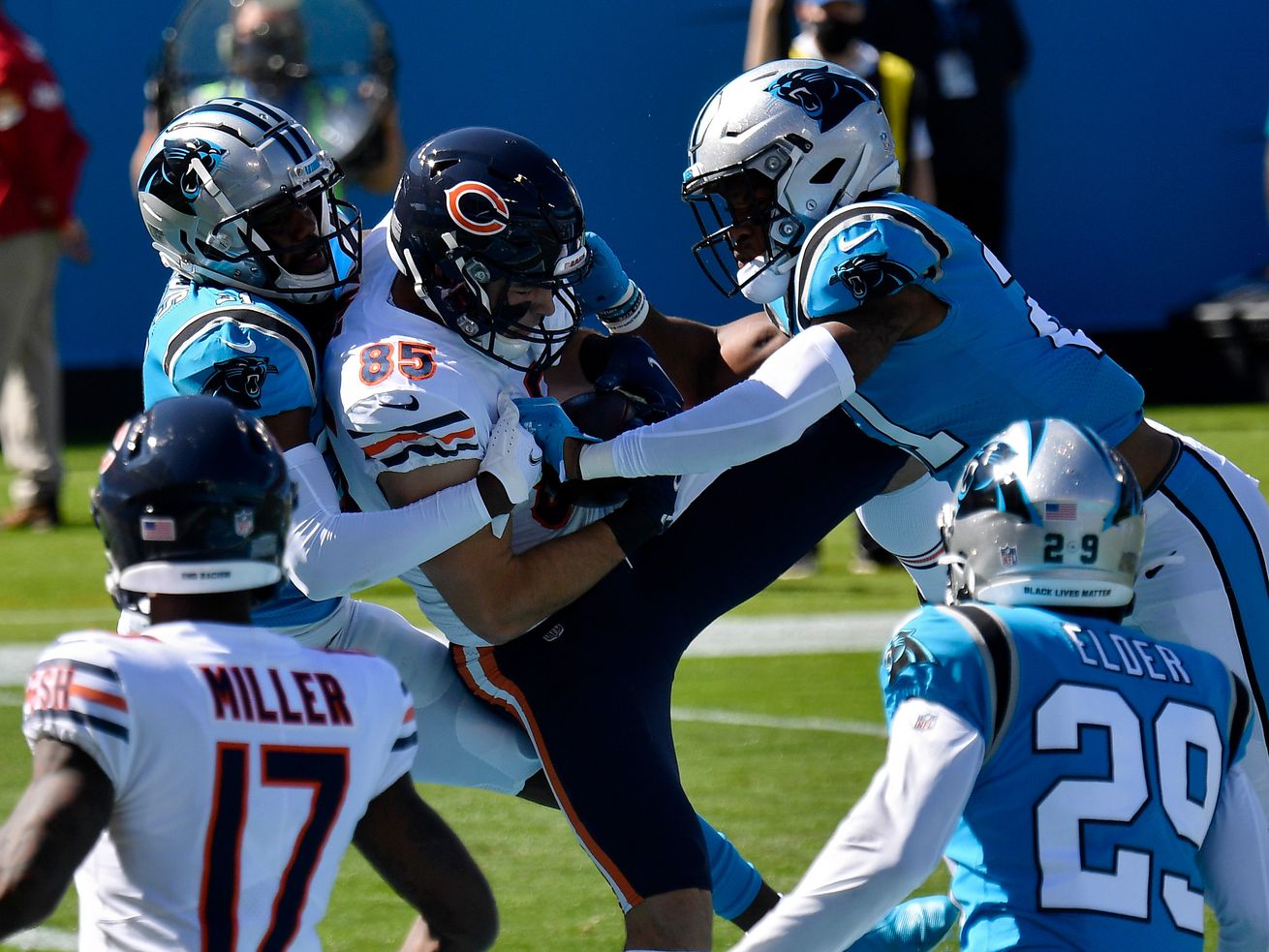 Bears rookie tight end Cole Kmet (85) caught his only touchdown pass of the season against the Panthers on Oct. 18 at Bank of America Stadium. | Photo by Grant Halverson/Getty Images

The Bears rookie TE indeed has played more as Matt Nagy promised after Kmet’s 38-yard catch vs. the Rams. But in three games he’s only been targeted four times, with two catches for nine yards.

Seemingly embarrassed by the Bears’ offensive ineptitude in a -24-10 loss to the Rams on the ‘‘Monday Night Football’’ stage Oct. 26 at SoFi Stadium — particularly his offense being outscored 7-3 by his own defense — a despondent Matt Nagy latched on to the one promising offensive moment of the night.

“Cole Kmet is going to start playing more in this offense,” Nagy said resolutely after that game. “He’s deserved it. He earns it. He’s a guy that I think I’m really proud of the way he’s playing. For us, we have to be aware of that, understand that and start using him more.”

Since that game, Kmet has indeed played more snaps — 101 of 197 (51.3%) against the Saints (30 snaps), Titans (36) and Vikings (35). But it hasn’t translated to production. In those three games since Nagy’s edict, Kmet has been targeted four times, with two receptions for nine yards.

Therein lies yet another red flag for Nagy’s offense. No matter how hard the Bears try, they can’t get the ball to a player who is expected to be developing into a key weapon. And while Kmet still needs time to develop into the tight end the Bears envisioned when they drafted him in the second round in April, he’s at the point where he should be a big factor in a good offense.

Many stimulus programs are due to expire at the end of 2020, threatening the US economy during the COVID-19 pandemic's most challenging phase

And there’s the rub.

“Nothing wrong with Cole; it’s wrong with us,” offensive coordinator Bill Lazor said with refreshing candor last month when asked about Kmet’s production. “The problem is us.”

The question came up again after Kmet had one reception for seven yards on three targets against the Vikings — the lone catch coming when he cut in front of Allen Robinson to make the catch. When will Kmet be more productive in this offense?

“There’s nothing holding Cole back from doing that,” tight ends coach Clancy Barone said. “I’ve had guys in the past that are held back. . . . I’ve had basketball players that transitioned to the NFL — they just don’t know football, [and] that holds them back.

‘‘I’ve had guys that maybe weren’t bright, and it took them awhile to learn everything, and that held them back. That’s not the issue with Cole. There’s nothing holding Cole back.”

The only thing holding Kmet back, it seems, is the Bears’ offense, which is ranked 31st in the NFL in total yards, 32nd in rushing and 25th in passing. He’s ready whenever the offense is. Kmet has seven receptions for 86 …read more

Nvidia, AMD and Intel are leading an unprecedented $100 billion wave of acquisitions as the cloud and AI change the chip market: ‘The biggest year for consolidation ever; (INTC, AMD, NVDA)

Black Friday shopping like being in a ‘ghost town’