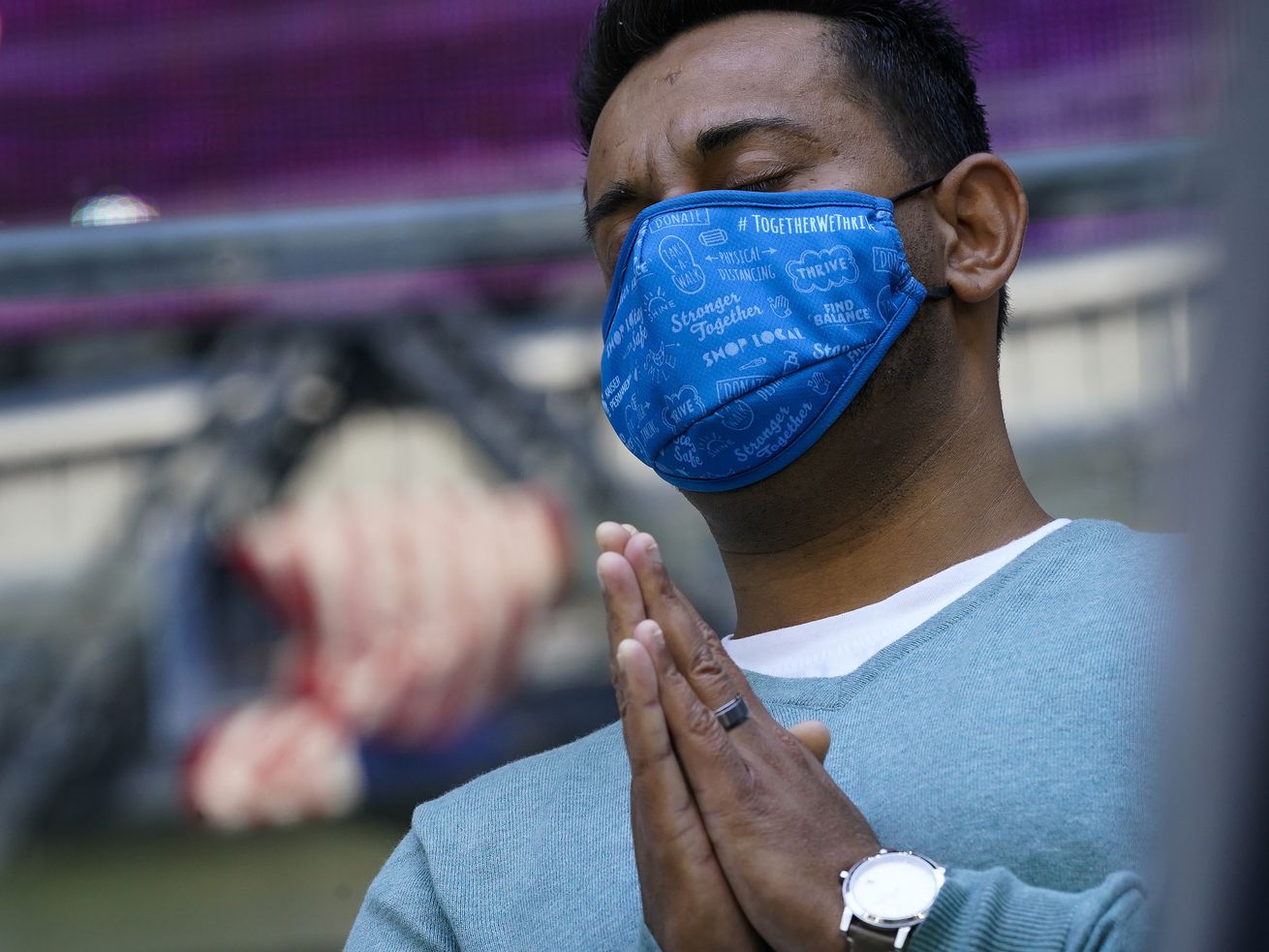 Jagraj Dhillon bows his head during prayer from leaders and members from the Sikh community during a gathering to honor the lives lost by the FedEx facility mass shooting last month, Saturday, May 1, 2021, at Lucas Oil Stadium in downtown Indianapolis. | Grace Hollars /The Indianapolis Star via AP

Members of the Sikh community and others gathered at Lucas Oil Stadium in downtown Indianapolis Saturday to remember the eight people killed in a mass shooting at a FedEx warehouse.

INDIANAPOLIS — Indiana’s governor told members of the Sikh community and others who gathered at a downtown Indianapolis football stadium Saturday to remember the eight people killed in a mass shooting at a FedEx warehouse that he knows their anguish from the attack is far from over.

The three-hour event at Lucas Oil Stadium came two weeks after a former FedEx employee fatally shot the eight people, including four members of Indianapolis’ Sikh community, before killing himself. Authorities have not released a motive in the April 15 shooting.

Under the stadium’s open roof, Republican Gov. Eric Holcomb said in his opening remarks that the capital city “is still reeling from the impact of that dark night.”

“Never in my wildest imagination did I see this day or this cause of gathering as a reason for our unification,” Holcomb told the hundreds of people in attendance at the stadium where the Indianapolis Colts play. “Why must any day be that dark? Why must tragedy strike and tear a community, tear humanity apart? This pain will for sure persist as we continue to live with the loss in all of our days to come.”

In a letter read aloud during the ceremony, former Vice President Mike Pence emphasized particular grief for the Sikh community, whose members “add to the tapestry of this country.”

“Know that our hearts and our prayers are with you all,” Pence, a former Indiana governor, said in his letter. “We join fellow Hoosiers across the state of Indiana and Americans across the country in expressing our heartfelt condolences. … You have been in our hearts since that horrific night, and you remain in our prayers today.”

A monotheistic faith founded more than 500 years ago in India’s Punjab region, Sikhism is the world’s fifth-largest religion with about 25 million followers, including about 500,000 in the United States.

Indianapolis Mayor Joe Hogsett said his message to the Sikh community, to immigrants and “to anyone who feels threatened by this act simply because of who they are” is that they are “welcome in Indianapolis, and it is the responsibility of every one of our residents to make sure you know that to be true.”

Hogsett, a Democrat, also reiterated his previous calls for changes to gun policy, saying the shooting could have been prevented. He said the city, state and country are “far past due for transformative action.”

Authorities have said that Brandon Scott Hole, 19, had two rifles that he was able to purchase legally, even after his mother called police last year to say her son might …read more