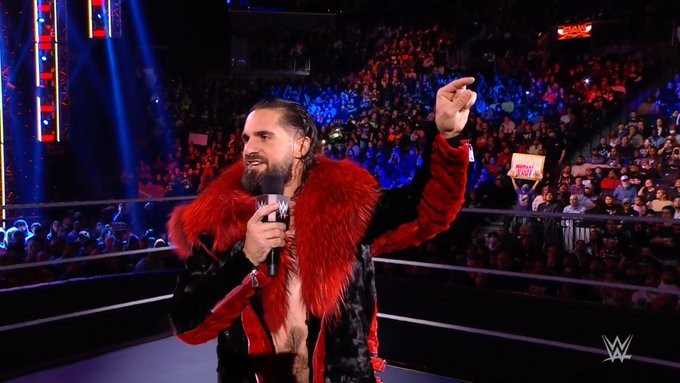 A fan charged at Rollins after his segment on Raw (Picture: WWE)

A man has been taken into custody following an attack on WWE superstar Seth Rollins.

The wrestler was heading backstage after a segment on Raw with Finn Balor when a fan charged and tackled him during Monday’s show at the Barclays Center in Brooklyn.

Although cameras briefly picked up the incident on air, they quickly cut away when it became clear it wasn’t part of the show, with referees, security and officials breaking things up.

In a statement to Metro.co.uk – who were in attendance and saw the events unfold – WWE said: ‘WWE takes the safety of its performers very seriously.

‘The individual who attacked Seth Rollins has been turned over to the NYPD and will be prosecuted to the fullest extent of the law.’

A spokesperson for the New York Police Department as since told ESPN that a 24-year-old man has been taken into custody following the attack.

It’s said charges are pending, and the police spokesperson told the outlet that the man’s name will be released once the charges are official.

Rollins tried to stay in character during the incident, and even recovered to pose on air to bring the segment to a close.

He would come back out later in the night too as he and Kevin Owens watched the WWE Title main event between champion Big E and challenger Austin Theory.

The wrestler jokingly glanced over to the direction the man came from earlier, as he made light of the incident.

He’s yet to publicly address what went down, while the show continued and later saw new Women’s Tag Team Champions crowned, while the aforementioned main event came as part of promotion for Dwayne ‘The Rock’ Johnson’s Netflix movie Red Notice.

Vince McMahon was back on screen with everything focus around a golden egg, which he appeared with at Survivor Series the previous evening at the same venue.

Northwestern falls to Providence for first loss of season

Huda Fahmy’s Graphic Novel ‘Huda F Are You?’ Is Full Of Clapback Wit