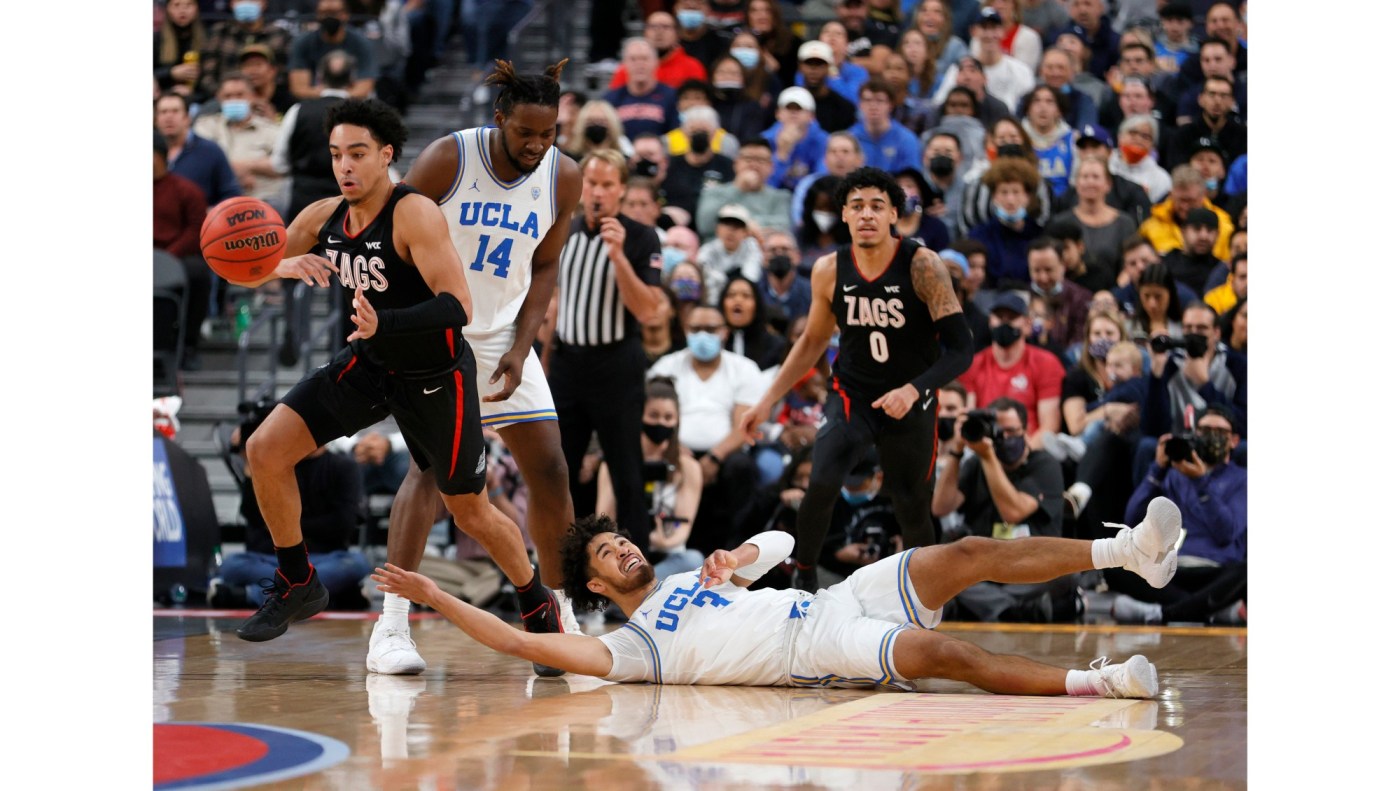 LAS VEGAS — UCLA coach Mick Cronin had a message for his team after the Bruins sputtered to a win over Bellarmine on Monday night – a victory that he said he viewed as a “loss” because of the team’s performance.

He spoke about attitude, approach, hustle, effort and execution. He also said that his “challenge all year is to make sure (the team) stays humble.”

Cronin got some help with that Tuesday night as top-ranked Gonzaga served up a heaping dish of humility two days before Thanksgiving in a nationally televised 83-63 victory over the second-ranked Bruins at T-Mobile Arena.

Gonzaga’s Andrew Nembhard led all scorers with 24 points, and Drew Timme had 18 points and eight rebounds.

For 35 minutes, the game was never close. Gonzaga (6-0) started the game 6 for 7 from the field while UCLA’s shooting woes from Monday night carried over into a 2-for-10 start in the opening five minutes. A Rasir Bolton corner 3-pointer made it 16-6.

The Bulldogs extended their lead to 24-8, including a 14-2 run while shooting 75% from the field. Cronin took a timeout at the 11:18 mark of the opening half, and drew up a play for freshman Peyton Watson. Watson worked to get an open shot in the middle of the key, but he missed it.

Moments later, Holmgren made a layup before Johnson missed one of his own that led to another Bolton 3-pointer to make it 29-8. Nembhard had two consecutive coast-to-coast layups that made the scoreboard ugly. UCLA trailed 33-10 with 8:37 to play in the first half.

Q&A: What you need to know about this new COVID variant in South Africa

Holmgren was impressive, and dominant. He had a sequence in the first half that dazzled the crowd when he had one of his four blocked shots at the rim then had a behind-the-back move that ended in a two-handed dunk on the other end of the court.

UCLA trimmed the deficit to 16 points with about six minutes left into the second half (56-40), but Gonzaga, again, had a response that halted any scent of a comeback. Julian Strawther hit a 3-pointer to balloon the lead back to 19.

Holmgren hit a 3-pointer with 1:41 left to balloon the lead back to 20 at 79-59. The freshman finished with 15 points, six rebounds and four blocks.

Gonzaga’s lead never dropped under 18 points in the final 10 minutes of the game.

High school football: Where to find our complete Week 14 coverage

This Confederate Flag-Tattoo’d Felon Is Running for Congress