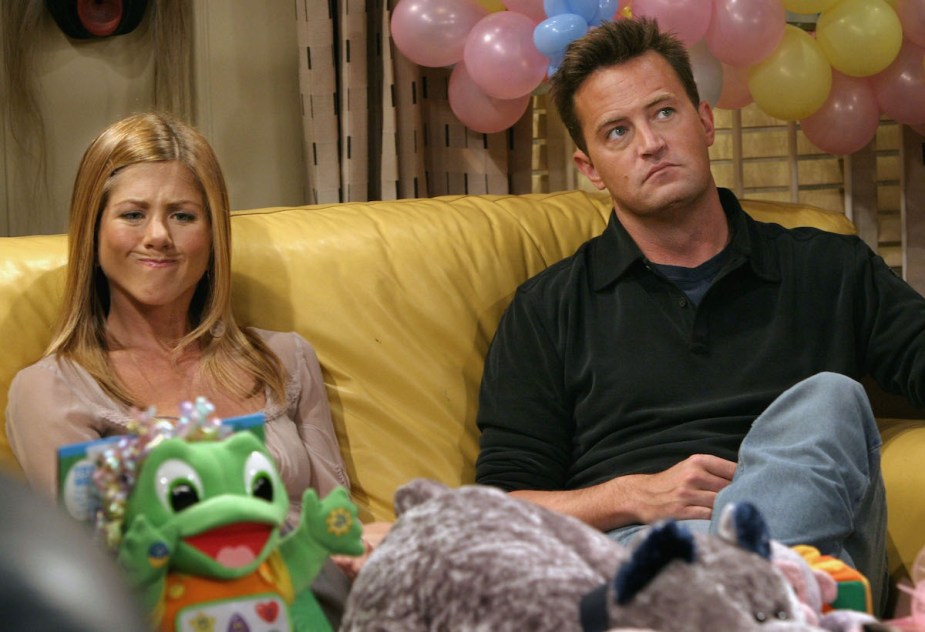 As one of the most beloved sitcoms of all time, Friends debuted in 1994. By the hit series’ second season in 1995, the Friends’ cast had rocketed to stardom as the show gained massive popularity.

Friends fans began marching into salons to get “the Rachel” haircut, grouping at coffee shops like gaggles of geese, and delivering jokes with all the pizzazz of Chandler’s zingy one-liners. But even the biggest Friends fans likely missed Jennifer Aniston and Matthew Perry’s 1995 “cyber sitcom.”

Season 2 is an iconic part of the ‘Friends’ lexicon

Few Friends fans can forget Season 2’s premiere as Rachel (Aniston) waits for Ross (David Schwimmer) at the airport only to discover Ross has gotten himself a new girlfriend. A few episodes later, fans swooned over the couples’ epic first kiss in episode 7, “The One Where Ross Finds Out.”

Likewise, Chandler’s (Perry) failed eviction of his roommate, Eddie (Adam Goldberg), in Friends season 2 episode 8 is a fan favorite as is “The One With The Two Parties” when the friends must manage two parties for Rachel’s divorcing parents.

However, as Friends’ greatest hits were in the making, Aniston and Perry teamed up to make another sitcom — a “cyber sitcom” for the then cutting-edge Windows 95.

The 28-minute, sitcom-style instructional video (available on YouTube) begins with Aniston and Perry arriving at Bill Gates’ office. They find the tech guru unavailable despite their invitation. Gates’ assistant herds the pair into his office and seats Aniston’s tech un-savvy character in front of the computer.

Perry eagerly leans over her shoulder and occasionally commandeers the office chair. The pair is taught step-by-step how to use Windows 95’s most basic functions.

Like a sitcom, various guest characters appear throughout the episode. These include a zealous window-washer fueled by Windows puns, a culturally insensitive Chinese food delivery worker who instructs Perry on right-click functionality, and a rocker who brings his video on CD-Rom.

The video has a sense of familiarity about it. Aniston and Perry essentially play their roles from Friends despite using their real names. But the video is far more of a successful instructional video than it is a funny sitcom.

‘Friends’ product promotion over the years

As Windows changed its programming to keep up with the industry’s breakneck pace, Aniston and Perry’s instructional video fell into obscurity. But, over the series’ spectacular ten-year run, Friends’ popularity was used to promote many products.

Fans will likely remember product-heavy storylines such as Rachel’s fondness for Pottery Barn, Joey’s perfume-spritzer days with the brand Bijan, and the time Joey found the keys to a Porsche in Central Park in season 6.

Other products like soft drinks (specifically, 7Up, Coca-cola, and Sprite) and food (Instant Lunch, Toblerone, and Nestle Toll House chocolate) found their way onto the show along with games like Scrabble and Pac-Man (StoryPick).